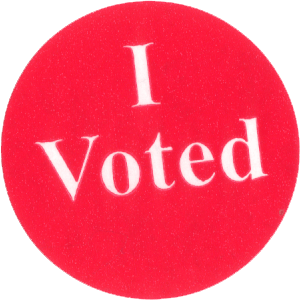 My absentee ballot went in weeks ago.

Because I'll be working on Election Day, I chose to vote by absentee ballot instead of rushing to my polling precinct and then possibly standing in line for ages. I took advantage of the fact that Florida offers the oppotunity to vote early via absentee ballot.

I voted, I did my duty as an American citizen, and by doing so, I earned the right to complain. And you know that, no matter who wins, the taxpayer will lose.

The only excuse I can think of for not voting is that you were in a coma. The military voted. Even astronauts voted. If you didn't vote, you don't have the right to voice an opinion. The only right you have is to keep your pie hole shut.