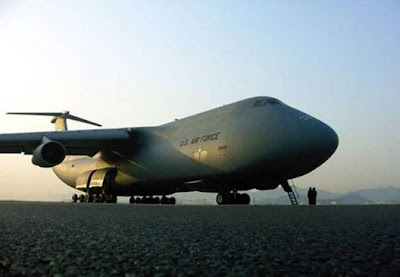 While the C-5 was turning over its engines, a female crewman gave the G.I.s on board the usual information regarding seat belts, emergency exits, etc.

Finally, she said, "Now sit back and enjoy your trip while your captain, Judith Campbell, and crew take you safely to Afghanistan."

An old Master Sergeant sitting in the eighth row thought to himself, "Did I hear her right? Is the captain a woman?"

When the attendant came by he said, "Did I understand you right? Is the captain a woman?"

"Yes!" said the attendant, "In fact, this entire crew is female." 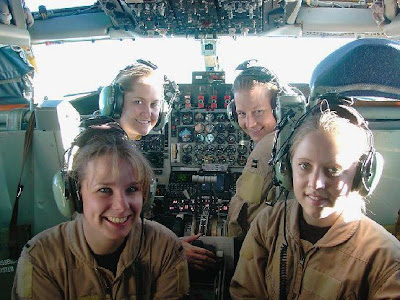 "My God," he said, "I wish I had two double scotch and sodas. I don't know what to think with only women up there in the cockpit."

"That's another thing, Sergeant," said the crew member, "We no longer call it 'The Cockpit'."

The Texas governor and possible presidential hopeful says America can only solve its problems through Jesus.

Texas Governor Rick Perry Gov.Rick Perry raised some eyebrows recently when he officially declared three "Days of Prayer for Rain in the State of Texas," which has been plagued by drought. But now Perry (these days a pundit-approved possible presidential contender)is taking his advocacy for public prayer a step further. Perry is the man behind a new conservative Christian event called "The Response: A call to prayer for a nation in crisis." It is a day of prayer and fasting to be held at Reliant Stadium in Houston in August.

Says Perry in a letter on the front page of the event's website: "Right now, America is in crisis. We have been besieged by financial debt, terrorism, and a multitude of natural disasters. As a nation, we must come together and call upon Jesus to guide us through unprecedented struggles, and thank Him for the blessings of freedom we so richly enjoy." Perry adds that, "There is hope for America......So who else will be at The Response? "Governor Perry has invited all U.S. governors as well as many other national Christian and political leaders," according to the event's website. "People of all ages, races, backgrounds and Christian denominations will be in attendance to proclaim Jesus as Savior and pray for America." The Response is being organized at Perry's request by the American Family Association........

Governor Rick Perry recently attended a private dinner with oil and gas businessmen trying to help secure the $2M funding for: "The Response: A Call to Prayer for a Nation in Crisis", August 6th, Reliant Stadium, Houston, TX. The event was conceived, initiated and called for by Texas Governor Rick Perry. There will be no DVD sales, book sales, CD sales, T-Shirt sales, and no vendors...... just water, fasting and prayer. Below are his remarks last week in Longview:

In 1977, I had left the Air Force and moved home. I’ll be real honest with you — I was a bit lost spiritually, and I really didn’t know what I wanted to do with my life. So I moved in with my mother and father. Now that’s a real trip! I had been an aircraft commander, traveling all around the world, seeing amazing places that a boy from Paint Creek, Texas, had never even dreamed were out there before. I had this great epiphany during my mid twenties. As I had lived in Europe and South America and the Middle East, I saw all these different countries with different forms of government. I was actually paying attention to the dictatorships, theocracies, monarchies, democratic states, etc. I started making the connection between how those people lived and the form of government they had. It was most interesting for me, as I’d never really given that much attention to our form of government in America. I’d taken for granted this extraordinary country we live in, but I came to realize that America is really a special place. I also made the calculation that inside that really cool place was this incredible place called Texas!

At twenty-five, twenty-six years old, it dawned on me what an incredible country we live in, and that the vast majority of the people take it for granted. They abuse the privilege of living in a free country. They don't realize how so many other people live around the world. But with that knowledge, I went home and lived with my mom and dad. I moved back into my old room. At eighteen years old, I left to go to my beloved Texas A&M University. Nine years later I came back into my old room. I swear to God, I know mother cleaned it, but it looked exactly like it did the day I left. It had my football number on the door, and it had the all-star football game program still stuck on the bulletin board. It was an eerie moment for me to move back home. My dad was pretty sure I was the same stupid eighteen-year-old that had left. I was pretty sure he hadn’t gotten any smarter either. So we went through this really brutal period of time of finding our comfort zone. But God was dealing with me. At twenty-seven years old, I knew that I’d been called to the ministry. I’ve just always been really stunned by how big a pulpit I was gonna have! I still am. I truly believe with all my heart that God has put me in this place at this time to do His will.

On Aug the 6th of this year, 2011, we are going to have a day of prayer and fasting. And it’s going to be the real deal. It’s not going to be some program where we line up a dozen political figures to come in and talk. It’s going to be people standing on that stage, projecting and proclaiming Jesus Christ as our Lord and Savior at Reliant Stadium in Houston, Texas. Let me tell you, that’s a big stadium and there will be a lot of people. But it’s going to send a powerful message across this country! Our country’s broke. Well, actually, Washington’s broke; our country’s going to be just fine. But we’ve got to have men and women who are willing to stand up to proclaim the values that this country was based upon.

In 1774, at the Continental Congress when they got together and penned that first document, they talked about “life” and “liberty..” Interestingly, the third thing they talked about was “property.” A couple of years later, when they actually wrote the Declaration, they changed that “property” to “the pursuit of happiness.” I just signed a piece of legislation today, the immanent domain legislation. I tell people, that “personal property” and the ownership of that personal property is crucial to our way of life. Our founding fathers understood that it was a very important part of the pursuit of happiness. Being able to own things that are your own is one of the things that makes America unique. But I happen to think that it’s in jeopardy.

Here’s what I want to leave you with. I know from time to time, people will say something like, “There goes Perry. He wants to secede.” But I love this country. We’re a special place. We were created by God-fearing individuals who understood those biblical values and how powerful they could be and would be in the future. And I suggest that for our country, our best days are ahead if we’ll get on our knees and ask God to take over and give us wisdom. I may wear the Lord out every day in prayer. I pray for this country. I pray for restoration for this country. I pray for our president every day. I pray that God turns buckets of wisdom out on his head, that God will open his eyes. We can change this country, but it requires our giving it to Him and letting Him guide us.
Kitten here: the above was confirmed as accurately attributed to Governor Perry by snopes.com. Just for the record, I did some editing - specifically limited to removing extra spaces between words. I guess it's my OCD, but extra spaces, among other things, drives me nuts!
Posted by Kitten at 7/29/2011 12:01:00 AM No comments: Links to this post

Any time you call an 800 number (for a credit card, banking, charter communications, health and other insurance, computer help desk, etc) and you find that you're talking to a foreign customer service representative (perhaps in India, Philippines, etc), please consider doing the following:

The rep might suggest talking to his/her manager, but, again, politely say, "Thank you, but I'd like to speak to a customer service representative in the USA. YOU WILL BE IMMEDIATELY CONNECTED TO A REP IN THE USA. That's the rule and the LAW.

It takes less than one minute to have your call re-directed to the USA . Tonight when I got redirected to a USA rep, I asked again to make sure - and yes, she was from Fort Lauderdale.

Imagine what would happen if every US citizen insisted on talking to only US phone reps from this day on. Imagine how that would ultimately impact the number of US jobs that would need to be created ASAP

Remember - the goal here is to restore jobs back here at home - not to be abrupt or rude to a foreign phone rep.
Kitten here: I got this in email. Don't know whether it's true, or even works all the time, but it is food for thought, and a possible solution to the problem in the job market. Remember, don't be rude to the person you speak to; they're just trying to earn a living, too. I've worked customer service and I know how rude customers can be, especially when they are upset.
Posted by Kitten at 7/28/2011 12:01:00 AM No comments: Links to this post

Many of the problems we face
exist because the people who work
for a living are outnumbered by those
who vote for a living.
Author unknown.
Posted by Kitten at 7/26/2011 12:01:00 AM No comments: Links to this post

How do you starve an Obama supporter?
Hide their food stamps under their work shoes
Posted by Kitten at 7/25/2011 12:01:00 AM No comments: Links to this post

If you never felt pain, then how would you know that I am a Healer?