Just in time for Thanksgiving a blockbuster movie about sweet potatoes, 'The Silence of the Yams'
Posted by Kitten at 11/21/2009 11:59:00 AM No comments: Links to this post

THE NEXT GRASSROOTS REVOLUTION
From Rep. John Linder, The sponsor of HR 25, the FairTax legislation.

The most enjoyable parts about generating support for tax reform and my FairTax bill have been meeting energetic Americans, seeing the bill bring together hundreds of thousands of supporters, and pressing forward with more co-sponsors in the House of Representatives than ever. The most disappointing aspect of the process is hearing someone say that it’s a great idea, but it’s really too bad because it will never pass.

I believe we can pass fundamental tax reform because that is what we, as Americans, have always done. We have always been able to achieve great things and provide more opportunities for ourselves.

The can-do attitude is an American trait. Read the following, and consider the first reaction to the proposal: “We shall send to the moon, 240,000 miles away from the control station in Houston, a giant rocket more than 300 feet tall, the length of this football field, made of new metal alloys, some of which have not yet been invented, capable of standing heat and stresses several times more than have ever been experienced, fitted together with a precision better than the finest watch, carrying all the equipment needed for propulsion, guidance, control, communications, food and survival, on an untried mission, to an unknown celestial body, and then return it safely to earth, re-entering the atmosphere at speeds of over 25,000 miles per hour, causing heat about half that of the temperature of the sun.”

After outlining the challenge, John Kennedy set a self-imposed deadline to achieve this goal. He said we would do it and we wo uld do it in that decade. And he said if we were going to do it we had to be bold.

A comparison between the exhilaration of a victorious space race to our planet’s moon and changing the tax code is admittedly a stretch. But the point is that this is too great a nation to simply accept the fact that every aspect of our personal and business lives forever must be accompanied by the burden of a corrosive, bureaucratic and unfair system of taxation.

The FairTax fulfills our nation’s principles of less government, personal responsibility, and individual freedom by offering true long-needed tax relief in the form of lower prices, nearly nonexistent compliance costs, and the ability to choose how much to spend in taxes to all Americans, while eliminating the IRS and allowing Americans to keep their paycheck.

If you don’t think that Congress listens when the people express themselves, ask Dan Rostenkowski who, as Chairman of the Ways & Means Committee in 1989, had senior citizens chase him through the streets of Chicago and attack his car in reaction to a health care bill he had shepherded through Congress. Not surprisingly, Congress quickly voted to repeal the law.

I am not advocating hammering on the hood of someone else’s automobile, but I have seen the people move Congress. The American people can move Congress on fundamental tax reform as well. The FairTax generates excitement about what it can achieve for our nation and for future generations of Americans. At a Wednesday evening FairTax rally in Atlanta, 4,500 people packed a convention center and 3,000 more were turned away. The next rally in Orlando attracted 10,000 supporters on a Saturday morning. The Orlando Sentinel told the story of Bruce Sofge and David Rady, who left home at 1:30 AM for a seven-hour drive to the Orlando rally, and Kim Nichols, a flight attendant who took off work and put 400 miles on her 12-year-old Toyota Camry to join the rally.

I believe that this is the next grassroots revolution. And I know that we can make it a reality.

Big ideas take time and this is a big idea. Nonetheless, when a book I co-wrote about tax reform spends weeks at the top of the New York Times bestseller list, and can compete, albeit briefly, with Harry Potter, anything is possible.
Posted by Kitten at 11/20/2009 09:21:00 PM 1 comment: Links to this post

According to extensive studies by Dr. David Tuerck of the Beacon Hill Institute:

After enactment of the FairTax:

GDP is estimated to be 7.9 percent higher in the first year, 10.9% higher in year 10 and 10.3% higher in year 25 after enactment of the FairTax than what would otherwise be the case if the current system remained in place.

BHI is the research arm of the Department of Economics at Suffolk University in Boston. It specializes in the development of state-of-the-art economic and statistical models for the analysis of federal, state, and local economic policies and how they affect citizens and businesses. Dr. David G. Tuerck, director of the research team, serves as the Director of Beacon Hill Institute and as professor and chairman of the Suffolk University Department of Economics.
Posted by Kitten at 11/20/2009 09:20:00 PM No comments: Links to this post

FairTax dramatically reduces tax bias against work, encourages people to work more= Higher Productivity!
Fairtax.org
Posted by Kitten at 11/20/2009 12:01:00 AM No comments: Links to this post 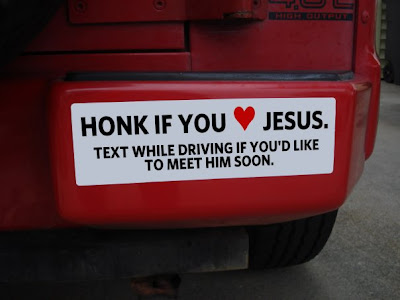 We were in slow-moving traffic the other day and the car in front of us had an Obama bumper sticker on it. It read: "Pray for Obama. Psalm 109:8".
My husband's Bible was lying on the dashboard; he got it and opened it up to the scripture and read it. He started laughing and laughing. Then he read it to me. I couldn't believe what it said. I had a good laugh, too.
Psalm 109:8: "Let his days be few; and let another take office."
Hallelujah and Amen !
Posted by Kitten at 11/18/2009 10:22:00 PM No comments: Links to this post

Labels: As It Should Be
Senior Health Care Solution

So you're a senior citizen and the government says no health care for you, what do you do?
Our plan gives anyone 65 years or older a gun and 4 bullets. You are allowed to shoot 2 senators and 2 representatives. Of Course, this means you will be sent to prison.
There you will get 3 meals a day, a roof over your head, and all the health care you need! New teeth, no problem. Need glasses, great. New hip, knees, kidney, lungs, heart? All covered.
And who will be paying for all of this? The same government that just told you that you are too old for health care. Plus, because you are a prisoner, you don't have to pay any income taxes anymore. And you’ve done us all a favor by disposing of 4 worthless politicians.
IS THIS A GREAT COUNTRY OR WHAT?!
Posted by Kitten at 11/18/2009 09:43:00 PM No comments: Links to this post