Did you hear about the new line of Elvis Presley-themed steakhouses? They will be for people who love meat tender.
Posted by Kitten at 4/04/2009 05:02:00 PM No comments:

Readership
Wow...I just realized I've increased my readers by 200%. I thank each of you for even bothering to read my sometimes pathetic whinings, rantings, and ravings. I am humbled and vow to try to live up to your expectations.
Posted by Kitten at 4/04/2009 02:49:00 PM No comments:

A university student fell in love, and dropped out of school to marry her young love. She wrote  her parents to say that she had put the heart before the course.
Posted by Kitten at 4/03/2009 05:03:00 PM No comments:

A woman walks into a post office to mail a letter. She notices a man standing at the counter with a pile of pink envelopes. She watches as he places a Love stamp on each one and then sprays it with perfume.
Her curiosity gets the better of her, so she approaches the man. "What are you doing?" she asks.
"I'm mailing 1,000 Valentine's Day cards signed, "Guess who?"
"Why would you do that?" asks the woman.
"I'm a divorce lawyer," was the man's reply.
Posted by Kitten at 4/02/2009 05:03:00 PM No comments:

Labels: Economics
As the Big 3 auto manufacturers face bankruptcy, we must go back to the old basics. We will need to again embrace the original Sport Utility Vehicle: 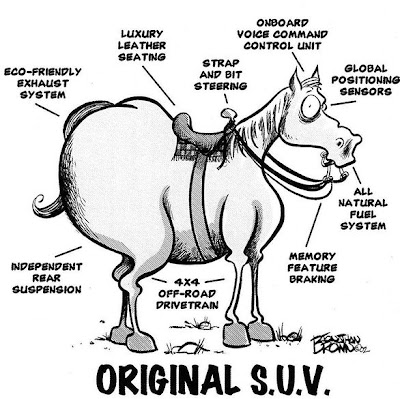 New Virus/Worm Threat
I've just heard that there is a new worm set to deploy on April 1. That's tomorrow. Seeing that the date is April Fool's day, I don't know whether to believe this or not.
It could be an April Fool's joke. The joke could be that it's real. Who knows?
If your computer virus program isn't up to date, do it now! If you don't have virus software installed, you're just asking for problems and probably won't listen to me anyway. Whether or not this worm is for real, there are people out there who write these programs for fun and yes, for profit. Don't take the chance, get the software.
There are several free programs that are excellent. AVG and Avast come to mind.  I have not used Avast, so I can't comment on it on way or the other. One of my coworkers used to be a computer tech and prefers Avast. I have Norton running on my computer, but I prefer AVG. Norton was installed on my computer when I bought it, and I still have a few weeks left on the free trial. When that runs out, I'll install AVG. It's a good program, I'm familiar with it and the price is right (free!). The free AVG program provides updates just like the paid program, so there are no worries there. Your choice is a matter of preference.
Just because you pay for a program doesn't make it better than others. The bad part of freeware is that you usually don't get any support services. If you are relatively computer savvy, you may not need to pay for the full ride. I'm not a computer expert by any means, but I can usually handle the problems that come along. I found that out when I had to call Bright House to come out and try to figure out a problem with my Internet connection (it turned out to be a Vista problem). Turns out, the tech did everything I had already tried (thank you for trying, Bright House!). That proved to me that my computer skills are better than I had thought.
Another thing you might try is a trick I learned from a friend. Years ago, another virus was set to be released on a certain date. My friend simply changed the date in his computer. So I changed the date in my computer to April 7 - after the supposed release date of this new worm. If this is a real threat, it may not protect my computer from computers infected on April 1, but my virus software should catch anything that comes in after April 1. And it gives Norton time to write an update (if they haven't already) and my computer time to download the update.
I chose April 7 because it's one week from today. That means that any programs I have scheduled for say, Wednesday, will still do whatever they are supposed to do, right on schedule.
Anyway, whether this is a true threat or not, it's a warning that you need to take care of your computer business.
Posted by Kitten at 3/31/2009 01:45:00 PM No comments:

"You cannot legislate the poor into freedom by legislating the wealthy out of freedom. What one person receives without working for, another person must work for without receiving. The government cannot give to anybody anything that the government does not first take from somebody else. When half of the people get the idea that they do not have to work because the other half is going to take care of them, and when the other half gets the idea that it does no good to work because somebody else is going to get what they work for, that my dear friend, is about the end of any nation. You cannot multiply wealth by dividing it."
~~~~ Dr. Adrian Rogers, 1931
Posted by Kitten at 3/30/2009 01:01:00 AM No comments:

Two boys were walking home from Sunday school after hearing a strong preaching on the devil. One said to the other, 'What do you think about all this Satan stuff?'
'Well, you know how Santa Claus turned out. It's probably just your Dad.'
Posted by Kitten at 3/29/2009 09:23:00 PM No comments: