Two robins were lying on their backs, basking in the sun.

A mama cat and her kitten were walking by.

The kitten complained, "Mama, I'm sooo hungry, what can we eat?"

A young college co-ed came running in tears to her father. "Dad, you gave me some terrible financial advice!"
"I did? What did I tell you?" said the dad.
"You told me to put my money in that big bank, and now that big bank is in trouble."
"What are you talking about? That's one of the largest banks in the state," he said. "there must be some mistake."
"I don't think so," she sniffed. "They just returned one of my checks with a note saying, 'Insufficient Funds'."
Posted by Kitten at 8/12/2011 12:01:00 AM No comments: Links to this post 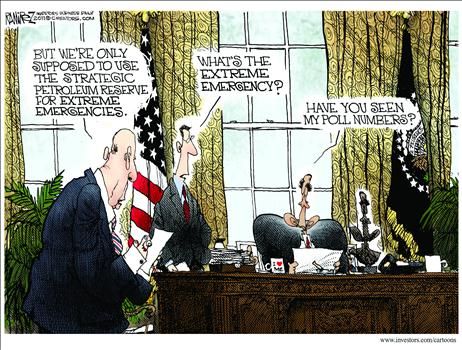 The 26th amendment (granting the right to vote for 18 year-olds) took only 3 months & 8 days to be ratified! Why? Simple! The people demanded it. That was in 1971...before computers, before e-mail, before cell phones, etc.

Of the 27 amendments to the Constitution, seven (7) took 1 year or less to become the law of the land...all because of public pressure.

I'm asking each addressee to forward this email to a minimum of twenty people on their address list; in turn ask each of those to do likewise.

In three days, most people in The United States of America will have the message. This is one idea that really should be passed around.

A Congressman collects a salary while in office and receives no pay when they are out of office.

3. Congress can purchase their own retirement plan, just as all Americans do.

4. Congress will no longer vote themselves a pay raise. Congressional pay will rise by the lower of CPI or 3%.

6. Congress must equally abide by all laws they impose on the American people.

7. All contracts with past and present Congressmen are void effective 1/1/12.

The American people did not make this contract with Congressmen. Congressmen made all these contracts for themselves. Serving in Congress is an honor, not a career. The Founding Fathers envisioned citizen legislators, so ours should serve their term(s), then go home and back to work.

Quote of the day:

If you never had a trial, how could you call yourself an overcomer?