"Former Republican Rep. Bob Barr of Georgia and former Democratic Sen. Mike Gravel of Alaska are among those actively seeking the nomination at the Libertarian Party convention, which begins today in Denver. The fact that such well-known, former establishment figures would seek a fringe party's presidential nomination demonstrates to many libertarians that their party has come of age. It's also created fear in Republican ranks that a viable LP candidate could throw a close election to the Democrats."
- Columnist Bruce Bartlett
Posted by Kitten at 5/24/2008 07:50:00 PM No comments: Links to this post

McCain to Host Possible VP's at His Arizona Home

But an aide says it's "purely social".

Oh, pul-leeze... why in the world would Senator John McCain be hosting these three particular men, Florida Gov. Charlie Crist, Louisiana Gov. Bobby Jindal and former Massachusetts Gov. Mitt Romney, unless he was "getting to know them" so he could begin the process of choosing a running mate?

Any of the three, plus any of the others on the list I previously posted, would be excellent choices...at least on the surface. I'm not getting into the why's and wherefore's of who McCain should choose (Huckabee), that's for another post.

I guess it's all part and parcel of politics that an aide would put forth the "purely social" nonsense. Is this what we can expect in the event McCain is elected? More subterfuge? Out and out lies? Come on, at least be believable.

How about...they're here to discuss...hurricanes and FEMA response to said hurricanes. All three are from states that can be hit by hurricanes. Or that they are getting advice from McCain on running for the Senate or even that they are starting a Republican prayer circle. Any would be more believable than that the visit is "purely social."

BUCHANAN RECEIVES “A IN ENGLISH” AWARD

Washington, D.C. –Congressman Vern Buchanan (FL-13) yesterday received the “A in English” award from U.S. English, Inc. for his support of legislation making English the official language of the United States.

“Theodore Roosevelt once said, ‘we have room for but one language, the language of George Washington and Abraham Lincoln, the language of the Declaration of Independence – the English language,’” Buchanan said. “I strongly support making English our official language because it is a common language helps us live and work together. Learning English will open doors for legal immigrants working to build a better life in this country.”

Congressman Buchanan is a cosponsor of H.R. 769, legislation that would make English our official language and end federal bilingual programs.

“I am pleased to present this award to Congressman Buchanan for his efforts to unite our diverse nation under the common language of English,” said Mauro E. Mujica, Chairman of the Board of U.S. English, Inc. “Rep. Buchanan has actively reflected the viewpoints of his constituents regarding official English legislation. At a time when there is renewed interest toward preserving what unites us as a nation, we are grateful to the Congressman for his dedicated and enthusiastic support of this issue.”

SARASOTA - Congressman Vern Buchanan, just back from a visit to the U.S. border with Mexico, said more agents and additional resources are needed to stop illegal immigration and drug smuggling. Buchanan was in El Paso, Texas on Friday to meet with border patrol and customs agents, inspect the border and view the technology they use in their efforts to secure the southern border.

"It's clear we are making progress but more needs to be done," Buchanan said. "Illegal immigration is one of the biggest challenges facing our country, costing us billions of dollars each year and putting an unacceptable burden on our hospitals, our schools, our jails and our communities."

Buchanan toured detention facilities, examined security technology - including night vision technology, met with border patrol agents and K-9 units and visited several sections of the border where security needs differ. During his visit he witnessed the apprehension of individuals attempting to enter the country illegally and drug smugglers as well as the confiscation of illegal drugs.

"I was very impressed with the professionalism and dedication of the men and women patrolling the border," said Buchanan. "They deal every day with the challenges of illegal immigration and I am grateful for their service."

The 13th District Congressman noted that in Florida alone, we have more than half a million illegal immigrants costing the state's taxpayers more than $1.7 billion a year for education, emergency medical care, and incarceration when they break the law.

"We need to secure the borders first if we are ever going to stop the flow of illegals into our country," said Buchanan. "That is why I went to the border and saw first-hand what we're doing. I talked to the agents to find out what is and isn't working.

The El Paso border patrol oversaw approximately 22,760,000 northbound crossings in fiscal year 2007. Additional fencing and agents have helped reduce apprehensions in there by 38% from fiscal years 2006 to 2007.

"This proves that if given the necessary resources we can reduce illegal immigration and smuggling," said Buchanan. "I am even more convinced now than before that with more agents, secure fencing and new technologies we can secure the border."

Specifically, Buchanan called for the following to help solve the problem of illegal immigration: Add more border patrol agents to monitor the crossings along the 2000 mile-long southern border; Require employers to verify workers are legal and take away the economic incentive for illegals to come here; and, Appropriate the necessary funding to finish building 365 miles of the 700-mile long security fence authorized in 2006 along the southern border.

The Congressman is a cosponsor of the Secure America through Verification and Enforcement (SAVE) Act. The bill would enhance border security, provide employers with the tools they need to ensure that their employees are here legally, and enhance the government's ability to enforce existing federal laws and penalize offenders.
Posted by Kitten at 5/22/2008 11:54:00 AM No comments: Links to this post 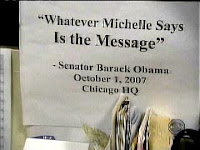 CBS Found Obama Rule: 'Whatever Michelle Says Is The Message'
By Tim Graham
Created 2008-05-21 13:38
In all the fuss over Barack Obama going on ABC and telling his opponents to "lay off my wife," some might have assumed that Obama was implying that Michelle Obama wasn't a major player in the Obama campaign. Read the transcript again [0], and you'll notice he never says that. (Michelle, however, felt compelled in that interview to deny Robert Novak's buzz that she axed Hillary from the ticket.)

All this reminded me of an April 24 CBS Evening News story where Katie Couric spent some gummy-grinned giggle time inside the Obama campaign HQ. As she surveyed the press shop, a camera found this sheet of paper with a Barack declaration of policy: "Whatever Michelle Says Is The Message."

Here's what Couric was saying as the shot hit the screen:

Then there's the press operation, answering questions from reporters, trying to tamp down any controversy, in constant contact with the road while trying to make sure the message of the day survives.

So when Barack says "lay off my wife," is he following the wife's message orders?

view link
When Michelle Obama makes a speech, she is putting her opinion out there for all to hear. Apparently, no one is allowed to comment, except maybe to say "how intelligent", "how wise", "I never thought of it that way" and therefore, what Michelle says is to be accepted without question.
Typical liberal mindset. When a liberal says something you must accept it without question. You may not have to bow at the altar of the speaker, but you must accept what is said without another thought of your own.
I'm not here to bash Michelle. She is as entitled to her opinion as I am to mine. I will not argue the fact that Micelle Obama is an intelligent, well-spoken woman. We need more of that in this world. I will say this: when the spouse of any political candidate speaks out their words become subject to scrutiny. And if someone has a different opinion, they should also be afforded the right that Michelle has: to speak freely. It's guaranteed in the Bill of Rights.
Amendment I
Congress shall make no law respecting an establishment of religion, or prohibiting the free exercise thereof; or abridging the freedom of speech, or of the press; or the right of the people peaceably to assemble, and to petition the Government for a redress of grievances.
Yes, Michelle, and everybody else in the United States of America, has the right to speak freely. I may not be the first to say that, but I will defend that right. But, there is no guarantee in the Constitution, Bill of Rights, or anywhere else that says no one can disagree with Michelle for that matter.
White I commend Senator Obama for telling the press to "lay off my wife", I think he's being a bit chauvinistic. I think Michelle is well able to speak for herself and to defend what she says. But, just remember, Senator, that once the words are out there, they are fair play.
It's guaranteed in the Constitution.
Posted by Kitten at 5/22/2008 10:53:00 AM No comments: Links to this post

OINK-OINK SAY THE PIGGIES
"(A)n angry (Rep. Paul) Ryan (R-Wis.) last Wednesday delivered unscripted remarks on the House floor as the farm bill neared passage: 'This bill is an absence of leadership. This bill shows we are not leading.' . . . A majority of both Senate and House Republicans voted for a bill that raises spending 44 percent above last year's, dooming chances to sustain President Bush's promised veto. GOP leaders were divided, with Bush sounding an uncertain trumpet. Today's Republican Party -- divided, drifting, demoralized -- is epitomized by the farm bill."
- Columnist Robert Novak

Uhmmmm...excuse me, but don't we have a Democratic controlled Congress now? I don't want anyone to think I'm trying to deflect blame away from the Republicans who voted for this bill, but doesn't "a Democratic controlled Congress" mean that there are more Democrats than Republicans in Congress? Doesn't that mean that the Democrats could have voted this bill down simply because they have more voting members in Congress?