Life is like a box of...stupid.
This was this guy's first boat, but he wasn't quite sure of the correct procedure for launching a boat at the ramp. However, he figured it couldn't be that difficult to do, so he stopped by his Union office for advice, and they just told him, "Don't let the trailer get too deep in the water when you're launching your boat".
Well later on, he couldn't understand what they meant by that, as he just could barely get his trailer in the water!
Here's a picture worth a "thousand' words! You're gonna love this guy!!! They walk among us, get married, have children and vote!
Oh, check out the sticker on back windshield. Some will say it explains everything. Others say, well...that's pretty much what everyone I've shown the picture to has said. 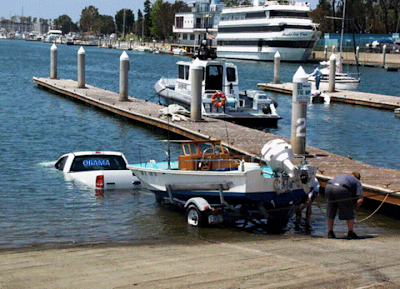 Labels: What Are They Thinking?

"The FairTax will not be revenue neutral (i.e. bring in the same revenue as the current system) at 23%"
The truth: The FairTax rate of 23% (when calculated inclusively like income tax rates) has been thoroughly researched to provide all the revenues now collected under both the income tax system and through FICA payroll taxes. Reports otherwise are largely based on the President's Advisory Panel on Tax Reform which declared the rate would have to be much higher. What the Panel failed to make clear in an amazingly shameless sleight-of-hand is that they never studied the FairTax legislation as it exists in pending legislation. They ignored $22 million of FairTax research and, instead, quietly devised their own national consumption tax which they loaded with the exemptions and deductions they felt were "politically realistic". They also failed to calculate the effects of elimination of the FICA tax on annual taxpayer burdens or on the distributional effects of the FairTax across the income spectrum. Upon completion--and after declaring a national consumption tax flawed--they then refused to publish their underlying assumptions.
For more information on this topic, see these research papers.
Taxing Sales Under the FairTax - What Rate Works?
A Comparison of the FairTax Base and Rate
Comparing Average and Marginal Tax Rates under the FairTax and the Current System of Federal Taxation
Posted by Kitten at 1/29/2010 12:01:00 AM No comments:

Labels: Observations
Headlines In the News

Cold Wave Linked to Temperatures
bet some smart scientist figured this one out
Posted by Kitten at 1/28/2010 12:01:00 AM No comments:

Headlines In the News

If Strike Isn't Settled Quickly, It May Last Awhile
hmmm....sounds like that jet crash expert opined on this one

Muth's News and Views
JANUARY 20, 2010
AND THE JACKASS OF THE YEAR AWARD ALREADY GOES TO.
"I wanted to apologize for calling Senator-elect Scott Brown an 'irresponsible, homophobic, racist, reactionary, ex-nude model, tea bagging, supporter of violence against women and against politicians with whom he disagrees.' I'm sorry, I left out the word 'sexist.'"
- Keith Olbermann, MSNBC/NBC anchor
AND THE RUNNER-UP IS.
"If [Massachussets voters] go for Republican Scott Brown it's deliberate, premeditated murder for health care!"
Chris Matthews, MSNBC/NBC show host
JUST NOT BUYING
"There's going to be a tendency on the part of (Democrats) to be in denial about all this, (but) "if you lose Massachusetts and that's not a wake-up call, there's no hope of waking up. . . . (M)oderates and independents even in a state as Democratic as Massachusetts just aren't buying our message. They just don't believe the answers we are currently proposing are solving their problems."
- Democrat Sen. Evan Bayh on Tuesday night's election results
SHOCKING!
"President Barack Obama's plan to fix the foreclosure crisis has been a dud, putting the housing market recovery at risk."
- Associated Press, 1/16/10
STIMULATING MORE BUREAUCRATS
"The Social Security Administration spent $30 million in stimulus money in 2009 to hire 585 new bureaucrats who will be responsible for certifying whether people are eligible for disability so they can be paid by the taxpayers not to work."
- CNS News, 1/20/10
WELL-MEANING INCOMPETENT
"The President's now-infamous 72-hour delay in speaking publicly about the Christmas Day attack may have added to a growing concern that President Obama may mean well, but he and his administration are lacking the level of competence we need."
- Rich Galen, Mullings.com, 1/19/10
BYE-BYE BOXER?
"California's Democratic Senator Barbara Boxer's days in the Senate may be numbered. After representing the Golden State for 18 years, Ms. Boxer is finally facing a formidable field of GOP opponents. . . . As voters become more familiar with the Republican candidates, Ms. Boxer's numbers seem likely to fall even farther."
- Allysia Finley, Political Diary, 1/20/10
JESSE "THE INVESTIGATOR" VENTURA
"Former Navy SEAL, professional wrestler, and Minnesota governor, Jesse Ventura, recently launched a new television show on the truTV cable channel. . . . Predictably, mainstream critics have universally condemned the series. . . . Contrary to the rants of modern critics, however, Ventura's Conspiracy Theory is not 'reality' television or 'mindless, good fun.' It is better investigative reporting than anything I've seen on ABC, CBS, NBC, CNN or FOX NEWS in a long, long time."
- Columnist Chuck Baldwin
SAYONARA SOUTHERS
"The man President Obama appointed to lead the Transportation Security Administration withdrew his name on Wednesday, a day after a 2008 video surfaced of him comparing the war on terror to global warming.
"Errol Southers' nomination was stalled by Sen. Jim DeMint, South Carolina Republican, who put a hold on it citing concerns Mr. Southers would give TSA collective bargaining rights. While the nomination was being held, it was also discovered that Mr. Southers gave misleading statements to Congress about a federal security database he twice accessed for personal reasons.
"Another blow, however, was delivered to Mr. Southers when the conservative-leaning CNSNews.com posted a 2008 video interview that he had granted to Videojug.com, an information-sharing video Web site. Mr. Southers was asked in the interview, 'How high should the war on terror be on our list of national priorities?'
"He replied, 'It should be high on our list of priorities because of, speaking globally, the threat that exists.' But Mr. Southers added later, 'I do think, however, it deserves to perhaps have some parity with global warming, with education, with the economy.' That statement, and others in the video, surely would have become part of the debate over his nomination, but Mr. Southers withdrew it on Wednesday morning."
- Amanda Carpenter, Hot Button, 1/20/10
MUTH'S TRUTHS
I haven't been this ticked off in a long time. According to a January 4th report on WRGB-TV 6 in Albany, NY, Richard and Margie Cressy were "arrested on child endangerment charges" after authorities received an anonymous tip. And just what heinous abuse were the Cressys inflicting on their four children, ages 8 to 14? You're not going to believe it.
These dastardly, diabolical monsters had dared to..
Read the rest HERE
FED-EXCESS
It's a new year, but the same old FedEx disinformation campaign. Here's what the anonymous writers for the "Brown Bailout" project wrote on Tuesday:
"When Congress returns to Washington this week, UPS lobbyists will be back to their old games, lobbying Congress for an unfair, anti-competitive bailout that could threaten the nation's overnight delivery network and cripple entire sectors of our economy. If UPS succeeds in getting the 'Brown Bailout' passed, consumer shipping costs could rise and service and reliability could suffer. Put simply, this could hurt businesses and individuals across the country."
Now here's how the release SHOULD have been written:
When Congress returns to Washington this week, FedEx lobbyists will be back to their old games, lobbying Congress to keep an unfair, anti-competitive corporate welfare subsidy that creates an uneven playing field in the overnight delivery market and uses federal labor law to give FedEx an undeserved and unfair marketing advantage. If FedEx succeeds in retaining this corporate welfare subsidy, the uniquely and quintessentially American concept of equal justice under the law will continue to suffer. Put simply, this would hurt the free market for all businesses and individuals across the country.
There, that's better. And accurate and truthful, to boot.
FAMOUS LAST WORDS
"Politics is the art of looking for trouble, finding it, misdiagnosing it, and then misapplying the wrong remedies."
- Groucho Marx
Posted by Kitten at 1/25/2010 12:01:00 AM No comments:

Labels: Columnists and Commentators
Headlines In the News
Miners Refuse to Work After Death
Is that Union rules?
Posted by Kitten at 1/25/2010 12:01:00 AM No comments: