I recently visited a mental asylum, and I asked the director "how do you know when a person needs to be institutionalized?"

He said, "Well, we fill a bathtub with water, and we offer a teaspoon, a teacup and a bucket and ask them to empty the tub.

I said "I see...a normal person would choose the bucket because it is bigger."


The annual MLK observance at the state house in Columbia, SC had an interesting twist this year. The event is held on the north side steps of the statehouse. Prominent at that location is a large bronze statue of George Washington. This year, the NAACP constructed a "box" to conceal the father of our country from view so that participants would not be 'offended' by his presence. I could hardly believe my eyes when I saw this picture of the MLK Day rally in Columbia, South Carolina. This rally was sponsored by the NAACP and they said that they covered the statue because they "didn't want to offend anyone". Really? George Washington is the father of this nation. How is he offensive to anyone? 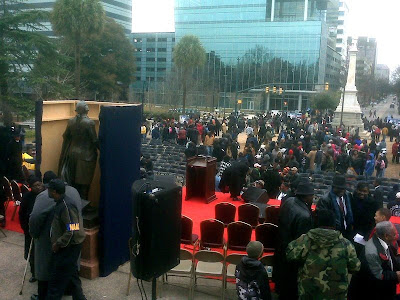 Can you imagine what would happen if we covered the statue of Dr. Martin L. King on President's Day? or is only the statue of a 'white guy' offensive?? Of course, this display of anti-Americanism wasn't covered at all by the national media (surprise, surprise !!), and the local paper in Columbia only ran a short piece on it. It has been covered a little by the blog-world but I think the word needs to get out to the general public that this is what the NAACP is all about...militant and (most definately) racist.


Kitten here: I'm not sure I would classify the NAACP as "racist", but I fail to understand why they think a statue of George Washington would offend anyone. And if so, why hold a MLK observation right there? Why just on MLK Day? If anyone were to be offended, wouldn't it be offensive on a daily basis  rather than just one one day of the year? Seems to me like "someone" thought that "someone" might be offended and wanted to avoid a possible issue.

If that's the case, while I respect that "someone" is trying to look out for others (those who might be offended by a statue), I'm concerned that this "someone" doesn't realize that there is no right to not be offended. I'm offended by things on a daily basis. It's part of living among the human race. If one is offended, one learns to deal with it. Either by ignoring it, swearing to ones self about it, complaining to friends and relatives, or working to remove the object of offense.

"Someone" is going to wear themselves out, and maybe drive themselves to the loony bin trying to make sure that no one is ever offended by anything.
Posted by Kitten at 9/07/2011 02:37:00 PM No comments: Links to this post

Adam was talking to God one day, and asked, "Why did you make Eve so pretty?"

God replied, "So you would love her."

Adam then asked, "Why did you make her such a good cook?"

God replied, "So that you would love her."

Adam asked, "Why does she have such a heavenly smile?"

God said "So you would love her."

Finally, Adam asked "Why did you make her so dumb?"