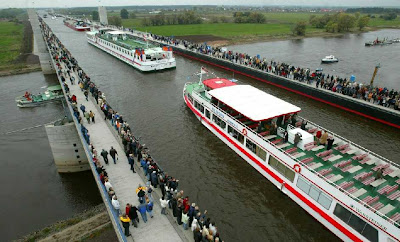 Even after you see it, it is still hard to believe!
Water Bridge in Germany. What a feat!
Six years, 500 million euros, 918 meters long........now this is engineering!
This is a channel-bridge over the River Elbe and joins the former East and West Germany, as part of the unification project. It is located in the city of Magdeburg, near Berlin. The photo was taken on the day of inauguration.
To those who appreciate engineering projects, here's a puzzle for you armchair engineers and physicists:
Did that bridge have to be designed to withstand the additional weight of ship and barge traffic,or just the weight of the water?
Answer:
It only needs to be designed to withstand the weight of the water! Why? A ship always displaces an amount of water that weighs the same as the ship, regardless of how heavily a ship may be loaded.
Archimedes' Principle: "any body fully or partially submerged in a fluid is buoyed up by a force equal to the weight of the fluid displaced."
~~~~~~~~~~~
I have to assume that Archimedes' Principle is correct as I am a dunce when it comes to engineering. All I can contribute to such a discussion is....wow!
Posted by Kitten at 9/12/2009 01:01:00 AM No comments: 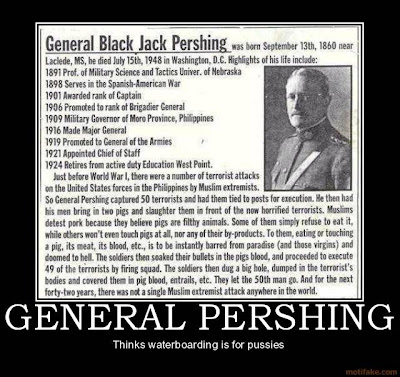 Undetermined according to snopes, but definitely a good read.
http://www.snopes.com/rumors/pershing.asp
I don't believe that treating extremists like they treat us is the way to go. They don't respect our laws or beliefs, so deal with them according to their own laws and customs.
And if one way to do that is as Pershing is supposed to have done, and it works, well, so be it.

And This is How Obama Remembers 9-11?
Posted By Bobby Eberle On September 3, 2009 at 7:11 am
When Michelle Malkin wrote yesterday of the plans by Barack Obama's White House to address school children across the nation and get them "thinking about" Obama, it really struck a nerve with our readers. He and his team have no limits on what they will do or say in order to inject socialist views into the minds of Americans.
But, it doesn't stop there. They also have absolutely no respect or appreciation for the American way and the sacrifices American's have made in order to stay free and to promote the American way of life across the globe. Just take the latest effort being pitched at BarackObama.com. Rather than remembering the Americans who lost their lives during the terrorist attacks on September 11, 2001, Obama's political team wants you to make phone calls on 9-11 to fight back against "Right-Wing Domestic Terrorists."
Many thanks goes out to The Heritage Foundation for casting light on what Obama is doing at his political web site BarackObama.com (which goes by the name "Organizing for America"). After pointing out what Obama and his team were doing, the web page shown below was taken down. 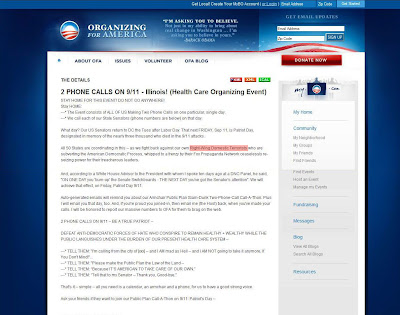 On the page, the Obama political team is advertising a "Health Care Organizing Event." This is how they choose to remember those lost on 9-11???
Supporters are asked to stay home and make two phone calls to their "State Senators." They are referring to U.S. senators, of course, but their lack of knowledge is nothing compared to what they write next. The web page recalls that Friday, September 11 is Patriot Day, which the page notes is "designated in memory of the nearly three thousand who died in the 9/11 attacks."
That statement REALLY gets to me. Why? Because it would be one thing if these people were making a health care push on 9-11 and were just too stupid to realize it was on a national day of remembrance. However, they fully know what day it is, and then they write this:
All 50 States are coordinating in this -- as we fight back against our own Right-Wing Domestic Terrorists who are subverting the American Democratic Process, whipped into a frenzy by their Fox Propaganda Network ceaselessly re-seizing power for their treacherous leaders.
This is absolutely outrageous, and this is exactly what was written on BarackObama.com. Obama and his team are using all means to get out their message on health care... even resorting to spamming e-mail messages. Yet, when the opposition tries to get its message out, that is labeled as "subverting the American democratic process." This is crazy!
But of course, the major blow is the comparison of conservatives opposed to Obama's health scare plan to members of al Qaeda who flew planes into buildings and killed thousands of Americans. Do Obama and his "friends" have no shame?
Again, this message was coming from BarackObama.com, the campaign arm of the Obama White House. Can you imagine if something similar were posted on GeorgeWBush.com when Bush was president?
The complete lack of comprehension to what the events of 9-11-2001 did to this country makes me sick. I was there! I saw Flight 77 hit the Pentagon. People died. And this is how Obama and his supporters remember them? Outrageous!
Obama truly does have a new vision for America. And it is so different from the America I grew up in. Hopefully people will "burn up the phone lines" as the web site suggests. But, instead of calling senators, people should call Obama and let him know that what we "hope" for is a "change" in leadership!
Posted by Kitten at 9/11/2009 01:01:00 AM No comments:

Labels: Columnists and Commentators
FairTax on Twitter
It's FairTax Friday - look at your paystub!
Taxes on savings destroys Americans incentives to save money. FairTax~ No more taxation on retirement accounts!

Let Your Voice Be Heard
If you disagree with the power-grabbing behavior of the leadership, click here to send a postcard to make your voice heard.
Some say that petitions, post cards and the like don't get to the intended recipient. My theory is even if the leadership doesn't see the postcards, they will hear about them. Thousands of postcards sent to the White House or Congressional mail rooms, all saying the same thing, will be noticed.
For some of us, this is the only way we have to say, "we've had enough!"
Posted by Kitten at 9/10/2009 08:03:00 PM No comments: 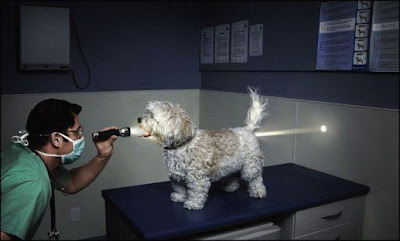 Labels: Chihuahuas and other dogs

Labels: Hurricanes
Cartoon from 1934
This cartoon was in the Chicago Tribune in 1934. Look carefully at the plan of action in the lower left corner. 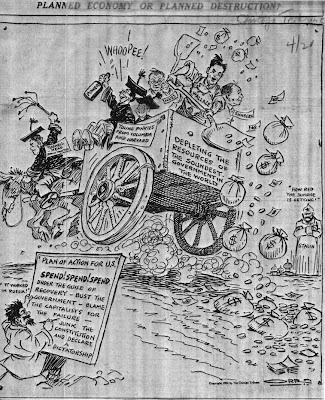 THE OBAMA SLIDE
"The number of Americans who trust President Obama to make the right decisions has fallen by roughly 17 percentage points. Obama's job approval is down to about 50 percent. All presidents fall from their honeymoon highs, but in the history of polling, no newly elected American president has fallen this far this fast."
- Columnist David Brooks
Posted by Kitten at 9/07/2009 01:01:00 AM No comments: 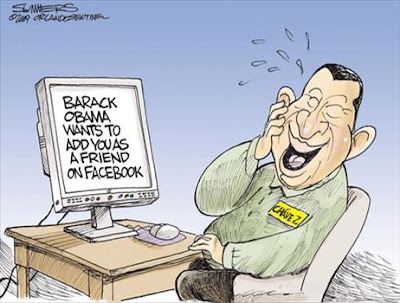