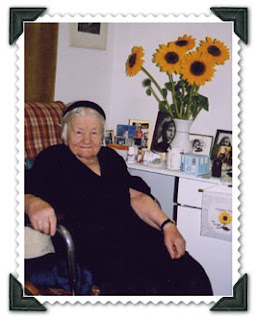 May 12 marked the death of a 98-year-old lady named Irena.

During WWII, Irena received permission from the Nazis to work in the Warsaw ghetto as a plumbing/sewer specialist.

She had an ulterior motive...

Being German, she knew the Nazis' plans for the Jews and smuggled infants out in the bottom of the large tool box she carried. Larger children were placed in a burlap sack in the back of her truck. Also in the back was a dog that she had trained to bark each time the Nazi guards allowed her out of the ghetto and back in.

The soldiers, of course, wanted nothing to do with the dog, and its barking c overed any noise made by the infants and small children. Irena managed to smuggle out approximately 2,500 children before she was finally caught. When she was captured, the Nazis beat her severely, breaking both her arms and her legs.

Irena kept a record of the names of all the children she smuggled out of that Warsaw ghetto and kept them in a glass jar buried under a tree in her back yard.

After the war, she tried to locate any parents who may have survived so she might reunite the child with its family. Most, of course, did not survive the Holocaust, and the vast majority of the surviving children were placed in foster homes or adopted.

Last year Irena was nominated for the Nobel Peace Prize, but she lost to Al Gore, who won the award for presenting a slide show on Global Warming.

Check it out at
http://www.irenasendler.org
http://www.snopes.com/politics/war/sendler.asp
True!
~~~~~~~~~~~~~~~~~~~~
Apparently, it can't be proven that Irena was even nominated for the Peace Prize as the Committee keeps the names of nominees secret for 50 years. If it is true, the Nobel Committee should be very proud of themselves for the selection of Al Gore.

Sure, a woman who saved 3,000 people from being murdered is less deserving of recognition of any sort than a man who has made his name on a contrived global warming issue which has been pretty well debunked as junk science.

Before anyone gets their boxers in a bunch, while I don't believe in the "global warming" issue, there are problems that need to be addressed such as energy conservation. But in order to address such issues, Al would have to get his own house in order or be labeled a hypocrite. But, that's not the issue of this post. Irena Sendler is.