Help Needed
I got this in email. I know I was asked to keep this confidential, but I can't help this person and thought somebody could.

Dear Sir/ Ma,
I believe you do not know me i am so sorry to come to you like this.

I am MRS. KIMAEVA LIOUDMILA a personal assistance to Mr. MikhailKhordokovsky the former C.E.O of Yukos Oil Company in Russia.

I have a very sensitive and confidential brief from this top (oligarch) to ask for your partnership in re-profiling funds over US$450 million. I will give the details, but in summary, the funds are coming via Bank Menatep.

This is a legitimate transaction. You will be paid 4% for your "management fees".

If you are interested, please write back by email
http://us.f534.mail.yahoo.com/ym/Compose?To=kimlioudmila@zonai.com and provide me with your confidential telephone number, fax number and email address and I will provide further details and instructions.
Please keep this confidential; we can't afford more political problems. Finally, please note that this must be concluded within two weeks. Please write back promptly.I will also suggest you visit these news sites on the internet to be better informed about this project.
http://www.winne.com/topinterviews/khodorkovsky.htm
http://newsfromrussia.com/main/2003/11/13/51215.html
http://www.supportmbk.com/mbk/mbk_bio.cfm
http://www.disinfopedia.org/wiki.phtml?title=Mikhail_B._Khodorkovsky
http://www.pbs.org/frontlineworld/stories/moscow/khodorkovskyinterview.html
http://www.forbes.com/finance/lists/75/2004/LIR.jhtml?passListIdu&passYear04&passListType=Person&amp;uniqueId=M1IF&datatype=Person
http://mikhail_khodorkovsky_society.blogspot.com/

Write me back. I look forward to it.
Regards,
Ms. Kimaeva Lioudmila

This was taken when we were packing for our cruise last November. I think he wanted to go too! 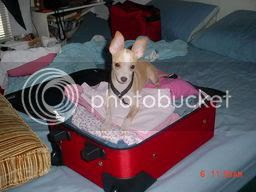 Sorry for no posts this week. I just haven't found much to post about when I had computer access. I have done some rambling this morning though, and thought I'd provide a few thoughts I found for your perusal:
These are from Chuck Muth's News and Views at Citizen Outreach:

WALLS COME TUMBLING DOWN: “Don't expect the Bush administration to get much credit, but the wall holding back Arab democracy is beginning to crack. From elections in Afghanistan, Iraq and Palestine to reforms throughout the region, it's unlikely any of it would've happened under a different U.S. president. In a surprise move over the weekend, Egyptian President Hosni Mubarak used a nationally televised speech to call for a constitutional amendment to allow opposition parties to participate in presidential elections.” - Brendan Miniter, Political Diary, 2/28/05
TRICK OR TREAT: “Hillary, in her true skin, is too stridently liberal and unlikable to be electable in a national election. But who says she has to show her true skin? . . . Hillary has done a far better job than I expected in faking her ‘centrism.’ She'll only get better in her ‘performances’ as time rolls on. . . . Hillary will never be a conservative. She'll never be a moderate. She'll never be anything other than a liberal. But she is getting quite accomplished at making it appear otherwise.” - Columnist David Limbaugh
BIG-TIME BACKFIRE: “We know that the amnesty (for illegal aliens) program didn’t work. We have done that once before under the Reagan years, and it backfired big-time.” - California Gov. Arnold Schwarzenegger
MILLION DOLLAR QUESTION: “I have one question. If cigarette lighters are such a threat to air security, why is OK to take them on a plane on April 13th, but not April 14th? I\'d really like to hear the line of reasoning for this from the enlightened TSA. If they are such a huge threat, why aren't they being confiscated immediately? - News & Views reader Matthew Best

SECRET OF THEIR SUCCESS: “Home-school success is not a new phenomenon. The vast majority of the Founding Fathers were home-schooled or received private one-on-one tutoring. The advantages of one-on-one tutoring are clear: no distractions and an environment where a child can learn at his or her own pace. So much more learning can take place in the home, which is the main reason home-schoolers score an average of 20 to 30 percentile points higher on standardized tests than public school students.”- Michael Smith of the Home School Legal Defense Association

U.S. OUT OF WTO: “The World Trade Organization, which the United States joined in 1994, has been disastrous for American sovereignty. . . . Make no mistake about it: WTO ministers tell Congress to change American laws, and Congress complies. In fact, congressional leaders obediently scrambled to make sure the corporate tax bill passed before a WTO deadline. Thousands and thousands of bills languish in committees, yet a bill ordered by the WTO was pushed to the front of the line.
“...Our membership in the WTO is unconstitutional, which is to say illegal. The Constitution grants Congress, and Congress alone, the authority to regulate trade. . . . Fortunately, Congress has an opportunity this year to withdraw our membership in the WTO.
“When the U.S. first joined the organization in 1994, a rushed lame-duck Congress inserted a 5 year review clause to garner some last-minute votes. This clause allows members of Congress to bring a resolution every 5 years calling for a vote on our continued membership. I plan to join with other House colleagues this year in demanding withdrawal from the WTO.” - Rep. Ron Paul (R-Texas), Texas Straight Talk, 2/28/05
Posted by Kitten at 3/05/2005 12:15:00 PM No comments: Links to this post

How Simply Do You Think?

This is a test that has been given to business executives to see how they think.

1. How do you put a giraffe in the refrigerator?

2. How do you put a elephant in the refrigerator?

3. The lion king is holding a meeting. All of the animals attend but one. Which one?

4. You need to cross a river populated by crocodiles. You don't have a boat. How do you get across?

Come on! Let's have a discussion!