It's an Animal's Life
I'M SO GLAD I'M NOT AN ONLY CHILD! 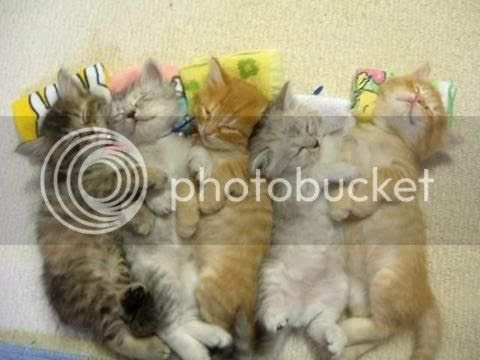 Osama found the biggest, meanest Doberman and Rottweiler female dogs in the world, and bred them with the meanest Siberian wolves. They selected only the biggest and strongest puppy from the litter, and removed his siblings, which gave him all the milk. After 5 years, Osama came up with the biggest, meanest dog the world had ever seen. Its cage needed steel bars that were 5" thick and nobody could get near it.

When the day came for the dog fight, President Bush showed up with a strange looking animal. It was a 9-foot-long Dachshund! Everyone felt sorry for President Bush, because there was no way that this dog could possibly last 10 seconds with the Afghanistani dog.

When the cages were opened up, the Dachshund came out of it's cage and slowly waddled over towards Osama's dog. Osama's dog snarled, leaped out of its cage, and charged the American Dachshund - but when it got close enough to bite, the Dachshund opened its mouth and consumed Osama's dog in one bite! There was nothing left of his dog at all!

Osama came up to President Bush, shaking his head in disbelief. "I don't understand how this could have happened. We had our best people working for 5 years with the meanest Doberman and Rottweiler female dogs in the world and the biggest, meanest Siberian wolves."

"That's nothing," said President Bush. "We had our best plastic surgeons working for 5 years to make that alligator look like a weenie dog!"

Nothing Better Than Friendship 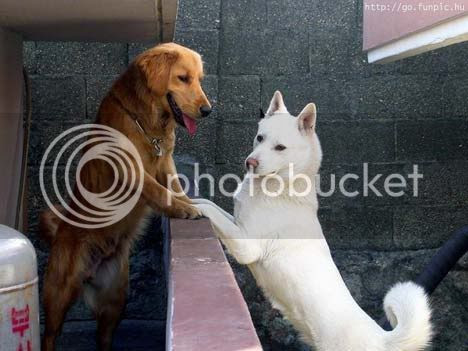 Wednesday Words of Wisdom
The gene pool could use a little chlorine
Posted by Kitten at 7/19/2006 09:51:00 PM No comments: Links to this post

But then there were 3 equally good arguments that Jesus was Jewish:

1. He went into His Father's business.
2. He lived at home until he was 33.
3. He was sure his Mother was a virgin and his mother was sure He was God.

But then there were 3 equally good arguments that Jesus was Italian:

But then there were 3 equally good arguments that Jesus was a Californian:

1. He never cut His hair
2. He walked around barefoot all the time
3. He started a new religion.

But then there were 3 equally good arguments that Jesus was an American Indian:

But then there were 3 equally good arguments that Jesus was Irish:

1. He never got married.
2. He was always telling stories.
3. He loved green pastures.

But the most compelling evidence of all - 3 proofs that Jesus was a woman:

TO: GOD
FROM: THE DOG