The Dixie Chicks and Patrotism
I’ve sort of stayed away from the Dixie Chicks flap over the last couple of years. One reason is that I believe in the 1st Amendment. The Chicks have the right to believe in what they believe and they have the right to express that belief. My ancestors, nine generations back, and the current 10th and 11th generations, fought in wars since the Revolution to guarantee that right. I expect future generations of my family will do the same.

I finally came across this quote and had to say something:

"The entire country may disagree with me, but I don't understand the necessity for patriotism," (Natalie) Maines resumes, through gritted teeth. "Why do you have to be a patriot? About what? This land is our land? Why? You can like where you live and like your life, but as for loving the whole country… I don't see why people care about patriotism."
I decided that “patriotism” needed to be defined. Dictionary.com defines it as:

Love of and devotion to one's country.
and

love of country and willingness to sacrifice for it [syn: nationalism]
There is nothing anywhere that says Ms. Maines has to be patriotic. But, Ms. Maines’ lack of understanding why people feel patriotic is part of the problem.

Ms. Maines and others like her apparently confuse “patriotism” with “cultism”. If you are conservative and “patriotic” you accept what the government says without question. Well, in America there are a lot of people who are protesting government actions everyday. And, they are allowed to do so. It comes under the 1st Amendment – Freedom of Speech. Everyone is allowed to express their patriotism in whatever way they choose - until they break a law. We are still a land of laws and if we didn't have laws there would be no America.
Going back to the question, why should you be patriotic? Because you care about your country. Being patriotic means believing you live in the best country in the world, that your countrymen are the most generous, most caring, and most willing to give of themselves to their country. Being patriotic does not mean blindly accepting what your leaders say, but believing that your country is the best in the world despite what your leaders have done or said. It’s love of country and what it stands for, or what you believe it could stand for.
I believe that America is the greatest country in the world. One of the reasons it is the best is because we have the right to say what we think, no matter how ill-advised, stupid, or idiotic it is. However, and this is one of the things I think some people don’t understand: there is no Constitutional guarantee or personal right to not to suffer repercussions for what we say. Too many people think that they can say whatever they want and they can't suffer repercussions for it (Hollywood celebrities come to mind). Ms. Maines and the Chicks alienated their fan base when they made their remarks. Their fans have the same right Ms. Maines has to say what they think. In the case of the fans, they chose to not attend concerts, and not purchase CD’s. Concert dates have been changed and even cancelled because they cannot fill the arenas. If as musicians they are willing to accept that their fan base has left them, because of their spoken opinions, then they must understand they have to accept the consequences.
Ms. Maines may not understand the need for patriotism, but it’s part and parcel of being a citizen - of any country. Again, I want you to understand that I am not calling Ms. Maines or anyone else unpatriotic or un-American because they do not believe as I do. If they don’t understand the need for patriotism, I don't think they can feel the same elation and pride I do when I see the Flag being flown, or hear the National Anthem, God Bless America, or America the Beautiful. I feel badly that they live such apparent negative lives that they can’t see the good in their country and in their fellow countrymen.
I feel sorry for them.

It's An Animal's Life
How long do we have to wait for dinner? 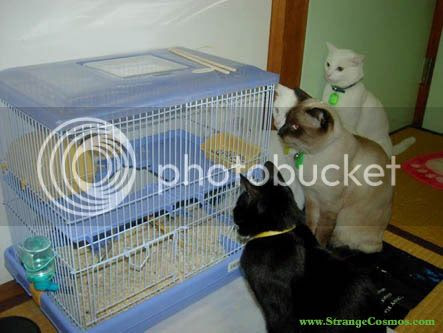 Who Will Do The Dishes?
(adult content warning)
Joe wanted to buy a motorbike. He doesn't have much luck until , one day, he comes across a Harley with a 'for sale' sign on it. The bike seems even better than a new one, although it is 10 years old. It is shiny and in absolute mint condition. He immediately buys it, and asks the seller how he kept it in such great condition for 10 years.
"Well, it's quite simple, really," says the seller, "whenever the bike is outside and it's gonna rain, rub Vaseline on the chrome. It protects it from the rain." And he hands Joe a jar of Vaseline.
That night, his girlfriend, Sandra, invites him over to meet herparents. Naturally, they take the bike there. Just before they enter the house, Sandra stops him and says, "I have to tell you something about my family before we go in. When we eat dinner, we don't talk. In fact, the first person who says anything during dinner has to do the dishes."
"No problem," he says.
And in they go. Joe is shocked. Right smack in the middle of the living room is a Huge stack of dirty dishes. In the kitchen is another huge stack of dishes. Piled up on thestairs, in the corridor, everywhere he looks, dirty dishes. They sit down to dinner and, sure enough, no one says a word. As dinner progresses, Joe decides to take advantage of the situation. So he leans over and kisses Sandra. No one says a word.
So he re aches over and fondles her breasts. Still, nobody says a word. So he stands up, grabs her, rips her clothes off, throws her on the table, and screws her right there, in front of her parents. His girlfriend is a little flustered, her dad is obviously livid, and her mom horrified when he sits back down, but no one says a word. He looks at her mom. "She's got a great body," he thinks. So he grabs the mom, bends her over the dinner table, and has his way with her right there on the dinner table.
Now his girlfriend is furious and her dad is boiling, but still, total silence. All of a sudden there is a loud clap of thunder, and it starts to rain. Joe remembers his bike, so he pulls the jar of Vaseline from his pocket.
Suddenly the father backs away from the table and shouts, "All right, that's enough, I'll do the dishes!"
Posted by Kitten at 6/30/2006 08:46:00 PM No comments: 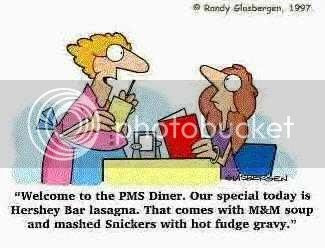 All of the "For The Ladies" series was shamelessly stolen from Grouchy Old Cripple in Atlanta. If you haven't been to GOC Central, you are missing a treat.
Posted by Kitten at 6/30/2006 04:22:00 PM No comments:

Comment Deleted
I just deleted a comment from the post in reference to the Fair Tax. Obviously from someone who is not a supporter of the tax. But, that is not the reason I deleted it.

The reason I deleted it was because it was a post in itself. Yes, it made claims that I don't agree with, such as "H.R. 25 would advance conservative ideals and principles." As I understand HR 25, it can be supported by anyone, liberals and conservatives alike.

He also ties in line item veto to the FairTax. Funny, I don't remember seeing anything about the line item veto in the bill, nor do I remember hearing Neal Boortz, Congressman John Linder, or Herman Cain, all vocal proponents of the FairTax mentioning it. I don't remember seeing it in either version of the FairTax book, either. In fact, this is the first time I have heard line item veto tied to the FairTax by anyone, proponent or opponent.
And before the author of that "comment", or anyone else, accuses me of ignoring his 1st Amendment rights, I will remind them that this is MY blog. I make the decision of what is posted here and what is not. I choose to post and to link to articles and sites that support the FairTax. That is my right. Nor do I have to link to, or provide links to other sites. If you want to find it, do a Google search.

Boudreaux
Boudreaux been fish'n down by de bayou all day and he done run outa night crawler baits. He be bout ready to leave when he seen a snake wif a big frog in his mouf. He knowed dat dem big bass fish like dem frogs, so he decided to steal dat froggie.
Dat snake, he be a cotton mouf water moccasin, so he had to be real careful or he'd git bit. He snuk up behin' dat snake and grabbed him roun de haid. Dat ole snake din't lak dat one bit. He squirmed and wrap hisself roun' Boudreaux's arm try'n to git hisself free.
But Boudreaux, he had a real good grip on de snake's haid, yeh. Well, Boudreaux pried his mouf open and got de frog and puts it in his bait can.
Now, Boudreaux knows dat he cain't let go dat snake or he's gonna bite him good, but he had a plan. He reach into de back pocket of his bibs and pulls out a pint a moonshine likker. He pour some drops into de snake's mouf. Well, dat snake's eyeballs kinda roll back in his haid and his body go limp. Wit dat, Boudreaux toss dat snake into de bayou. Den he goes back to fishin'.
A while later Boudreaux dun feel sumpin' tappin' on his barefoot toe.
He slowly look down and dare wuz dat water moccasin wif two more frogs........
Posted by Kitten at 6/27/2006 10:24:00 PM No comments:

TO: GOD
FROM: THE DOG

I have in my hands two boxes,
Which God gave me to hold.
He said, "Put all your sorrows in the black box,A
nd all your joys in the gold."
I heeded His words, and in the two boxes,
Both my joys and sorrows I stored,
But though the gold became heavier each day,
The black was as light as before.
With curiosity, I opened the black,
I wanted to find out why,
And I saw, in the base of the box, a hole,
Which my sorrows had fallen out by.
I showed the hole to God, and mused,"
I wonder where my sorrows could be!"
He smiled a gentle smile and said,"
My child, they're all here with me.."
I asked God, why He gave me the boxes,
Why the gold and the black with the hole?
"My child, the gold is for you to count your blessings,
The black is for you to let go."
Posted by Kitten at 6/25/2006 05:37:00 PM No comments: