The Border Control Game
Here's a link I found on GOC to an online "game". I normally would not advocate violence, and in reality, still don't. But, if you take it as a game, it might help to release some agression you have about the illegal alien issue.
Posted by Kitten at 5/27/2006 11:47:00 PM No comments: Links to this post

Happy Birthday, Dad!
Today would have been my Dad's 86th birthday.

I love and miss you Dad.

But I know you know that.

It's An Animal's Life
Sleeping In 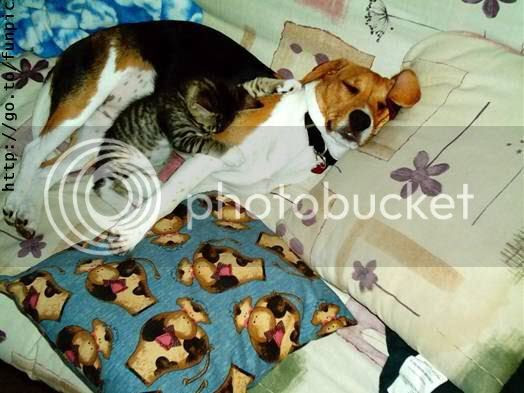 If you get to thinking you're a person of some influence, try ordering someone else's dog around.

For The Ladies
Q: What does it mean when a man is in your bed gasping for breath and calling your name?
A: You did not hold the pillow down long enough.

Little Towns
Those who grew up in small towns will laugh when they read this. Those who didn't, will be in disbelief (although they've heard the stories).

1) You can name everyone you graduated with.

3) You went to parties at a pasture, barn, gravel pit, or in the middle of a dirt road. On Monday you could always tell who was at the party because of the scratches on their legs from running through the woods when the party was busted. (See #6.)

5) You said the "F" word and your parents knew within the hour.

7) You could never buy cigarettes because all the store clerks knew how old you were (and if you were old enough, they'd tell your parents anyhow).

8) When you did find somebody old enough and brave enough to buy cigarettes, you still had to go out into the country and drive on back roads to smoke them.

9) You knew which section of the ditch you would find the beer your buyer dropped off.

10) It was cool to date somebody from the neighboring town.

11) The whole school went to the same party after graduation.

12) You didn't give directions by street names but rather by references. Turn by Nelson's house, go 2 blocks to Anderson's, and it's four houses left of the track field.

14) You couldn't help but date a friend's ex-boyfriend/girlfriend.

15) Your car stayed filthy because of the dirt roads, and you will never own a dark vehicle for this reason.

16) The town next to you was considered "trashy" or "snooty" but was actually just like your town.

18) The people in the "big city" dressed funny, and then you picked up the trend 2 years later.

19) Anyone you wanted could be found at the local gas station or the town bar.

20) You saw at least one friend a week driving a tractor through town or one of your friends driving a grain truck to school occasionally.

21) The gym teacher suggested you haul hay for the summer to get stronger.

22) Directions were given using THE stop light as a reference.

23) When you decided to walk somewhere for exercise, 5 people would pull over and ask if you wanted a ride.

24) Your teachers called you by your older siblings' names.

25) Your teachers remembered when they taught your parents.

26) You could charge at any local store or write checks without any ID.

28) The closest mall was over an hour away.

29) It was normal to see an old man riding through town on a riding lawn mower.

30) You've pee'd in a cornfield, or for those from the south, a cotton field.

Florida Senate Race
In November, Florida voters will decide whether to keep Bill Nelson as one of Florida's two senators, or to replace him with another candidate.
At this point in time, there are ten possible candidates to oppose Senator Nelson:
Katherine Harris - R
Belinda Noah - Independent
Floyd Ray Paterson - Independent
Brian Moore - Independent
Roy Tanner - Independent
Lawrence Tanner (no relation to Roy) - write-in
BsenatorSenter - Socialist Party/write-in
LeRoy Collins - R
Will McBride - R
Peter Monroe - R
I personally recognize only four names on the list. In addition to Senator Nelson and Representative Harris, I know Dr. Belinda Noah and recognize the name LeRoy Collins. Mr. Collins is the son of former Florida Governor LeRoy Collins who was governor in the late 50's and early 60's when my family first moved to Florida (we've done it twice). Of course, the fact that Mr. Collins father was once a Florida governor makes no difference.
Dr. Noah is a FairTax supporter. In fact, she is running on a FairTax platform. Do not expect to see Dr Noah attending Republican events, she apparently is not welcome since registering as an Independent in order to avoid running against Harris and Nelson. Smart move, I think. By running as an Independent, she may live to see the general election which, were she a Republican, there would be little to no chance.
Florida voters, I leave it up to you to educate yourselves. You know that for me, this is a one issue race: the FairTax. Senator Nelson refuses to take a stand. Until recently, so did Representative Harris. Recent events seem to indicate that she might be coming out if not for, at least not against the FairTax.
Senator Nelson is farther left of center than Senators Clinton, Kennedy, and Kerry, so my vote goes elsewhere. Unless Representative Harris takes a stand in favor of the FairTax, I will cast my vote for Dr. Noah. Of course, there are still five months and a couple of weeks to Election Day and a lot can happen.
Fasten your seatbelts. It's gonna be a bumpy ride!
Posted by Kitten at 5/23/2006 10:17:00 PM 4 comments: Links to this post

The only difference between the taxman and a taxidermist is that the taxidermist leaves the skin
--Mark Twain
Posted by Kitten at 5/23/2006 10:07:00 PM No comments: Links to this post

Flowers for You
I would rather have one rose and a kind word from a friend while I'm here than a whole truckload when I'm gone.

Dr. Jekyll's more successful second formula turned him into a world-class sprinter rather than a violent psychopath, proving that you can run but you can't always Hyde.
Posted by Kitten at 5/22/2006 12:13:00 PM No comments: Links to this post

Hot Air
My husband asked me one day not long ago if I had seen HotAir.com. I hadn't even heard of it, so of course I said no. He said I should take a look, he thought I would appreciate it.
Not long after, the next day as I recall, I heard about HotAir.com again. this time, it was described as being another Michelle Malkin site. So, being a Michelle Malkin fan, I naturally high-tailled it over to check it out. It looks to be mostly links to other stories, but this is okay. Sort of like Drudge or Lucianne and offeres video. Interesting.
It's on my sidebar.
Posted by Kitten at 5/21/2006 10:26:00 PM No comments: Links to this post

To My Readers
Lately I've gotten emails from visitors in other languages, German and French in particular. They haven't been left as "comments" to a post, but sent as email to me.
I enjoy getting feedback, but I'm not bi-or multi-lingual. Since I have little idea of what the emails said, I've deleted them.
I've been able to make out enough to realize I'm not being praised for the awesomeness of this blog, or even reamed out for an opinion I've dared to voice. A couple of words or phrases sort of lead me to believe I'm being invited to look at another site, but I'm not sure and even though a link is usually provided, I'm hesitant to blindly follow a link I have no clue as to where it leads. I don't like going up blind alleys. And while I doubt anyone is "out to get me" I don't want to provide ammunition either.
So, please, if you are leaving comments or emailing me, you'll have to do it in English. If you want a reply, leave a comment. If you use email, you'll have to leave your email address otherwise your email comes to me from "anonymous" and I can't reply without a return email. My reply might make a post, but that will depend on your comment and my reaction to your comment.
One more comment from me. When you do leave a comment, make it germain to the topic of the post or at least something that been posted somewhere on the blog. I've only deleted a couple of comments and those had absolutely nothing to do with the post itself, and in fact, I had never posted on the subject contained in the comment.
If you would like to suggest a topic for me to opine on, I'll be happy to see if it sparks interest in me. Perhaps we can start a discussion thread.
As always, I'm happy for feedback. Just be sure it's in English, please.
Posted by Kitten at 5/21/2006 09:55:00 PM No comments: Links to this post

What's Wrong With This Picture? 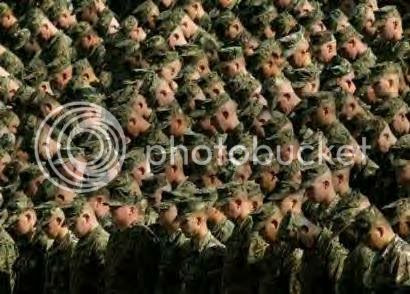 If you look closely at the picture above, you will note that all the Marines pictured are bowing their heads. That's because they're praying.
This incident took place at a recent ceremony honoring the Birthday of the Corps, and it has the ACLU up in arms. "These are federal employees," says Lucius Traveler, a spokesman for the ACLU, "on federal property and on federal time. For them to pray is clearly an establishment of religion, and we must nip this in the bud immediately."
When asked about the ACLU's charges, Colonel Jack Fessender, speaking for the Commandant of the Marine Corps said (cleaned up a bit), "Screw the ACLU."
GOD Bless Our Warriors, Send the ACLU to France. Please send this to people you know so everyone will know how stupid the ACLU is Getting in trying to remove GOD from everything and every place in America. May God Bless America, One Nation Under GOD!
What's wrong with the picture?
ABSOLUTELY NOTHING
Posted by Kitten at 5/21/2006 09:41:00 PM No comments: Links to this post

THE PRAYER OF JABEZ
And Jabez called on the God of Israel saying,
"Oh, that You would bless me indeed, and enlarge my territory,
that Your hand would be with me,
and that You would keep me from evil,
that I may not cause pain."
So God granted him what he requested.