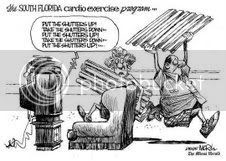 I am writing to say what an excellent product you have! I've used it all of my married life, as my Mom always told me it was the best. Now that I am in my fifties I find it even better! In fact, about a month ago, I spilled some red wine on my new white blouse. My inconsiderate and uncaring husband started to belittle me about how clumsy I was, and generally started becoming a pain in the neck. One thing led to another and somehow I ended up with his blood on my new white blouse! I grabbed my bottle of Tide with bleach alternative, to my surprise and satisfaction, all of the stains came out! In fact, the stains came out so well the detectives who came by yesterday told me that the DNA tests on my blouse were negative and then my attorney called and said that I was no longer considered a suspect in the disappearance of my husband.

What a relief! Going through menopause is bad enough without being a murder suspect! I thank you, once again, for having a great product.

Well, gotta go, have to write to the Hefty bag people.

You know I'm not found of the food stamp program. But we all love radio commercials. At least I do. Now there are radio commercials encouraging criminals to apply for food stamps. About 1 out of 6 people in the U.S. now rely on some form of public assistance. Why? Because we make it easy!

New Mexico, one of six states to get a food stamp participation grant, paid for outreach workers to work in areas with a high level of poverty but a low participation rate in the food stamps program. These areas are largely Hispanic.

So they go into these areas and they try to talk these people, most of whom are here illegally, into applying for food stamps. They try to de-stigmatize the program with advertisements in English, Spanish and Navajo. In Santa Fe, they got a $260k government grant to set up stores like Whole Foods to accept food stamps.

Now, Orange County, California has a Spanish language news report and ad campaign to encourage these people to get on food stamps and bring up the participation rate. In 2004, the Dept. of Agriculture worked in partnership with the Mexican Embassy to pass out brochures and air public service announcements encouraging food stamp use. Many of the people who weren't using the food stamps in Orange County were criminal illegal aliens.

New York City holds seminars to inform people that applying for food stamps does not affect their immigration status.

So not only do we look the other way as they flood across the border, we go out of our way to help them plunder government coffers.
Posted by Kitten at 6/16/2007 06:20:00 PM No comments: Links to this post

Labels: Politics
Happy Anniversary to Me!
Twenty-five years ago today, I started working for this agency. I can't believe how fast the last twenty-five years have gone by. I've outlasted a lot of people. Some quit, some retired, some were terminated, a few died. Some I miss, and some, I honestly don't even think about much less miss. Because I've lasted so long, I'm close to the top in seniority.

For several years my brother John was head baseball coach at a local high school. The then sheriff was into softball and played on an over-40 team with John. When the Sheriff decided to start an agency softball team to field in the Law Enforcement Olympics, he called Brother John to borrow equipment. Or rather, he called me to call John. During the softball years, I figured as long as John was loaning equipment to the Sheriff, I had a secure job. Well, John left coaching, the Sheriff retired and I'm still here. I wonder if the current sheriff knows my brother?

About three years into my tenure, my lieutenant said, "I see command in your future." He obviously didn't know me very well. I'm not the command sort. Oh, when I have to be in charge I can be. My last stint being in charge left me with a rather bad taste in my mouth for command. None of the line command ever put me in charge by word or memo. And in my business, if it's not documented, it didn't happen. I had all the responsibility with no real authority. So, it was never official and everybody I was supposed to be in charge of knew it. Some worked with me and a few pushed the envelope.

Five years ago, I reached the twenty year mark. I believe it was August when I was called to a Bureau Staff meeting to acknowledge my tenure and October when it was in the agency newsletter. I received a plaque, a certificate, a watch and photos with the sheriff presenting my awards to me. I don't really care about being called before the line staff to "honor" my time. Even though I'm a Leo, I don't like being the center of attention. As far as I'm concerned, if it must be publicly recognized, a line in the newsletter is plenty.

It won't be a couple of months into my next year before my years are recognized. I've already received an "invitation" to attend the next Bureau Staff meeting. I'll have to check to see what I'll get this time. Just something more to clutter the house. Of the things I got five years ago, the plaque is in a box somewhere, the certificate is in a folder somewhere, and I don't wear the watch (the face is much too small to be readable). Want to recognize my years in a form I will appreciate? Give me a pay raise in addition to my anniversary raise. Or a bonus. Now, that will be something I would like and can use.

Hmmm...reading back it sounds like I don't appreciate the recognition. Well, I do. But I more appreciate the fact that I have a job with an agency that could have laid me off at least three times now. I appreciate that the sheriff had enough loyalty to his employees, that during those unit closures, he found positions for everyone and no one lost their pay rate or seniority.

How did I make it twenty-five years? In the beginning I had to support myself. I could have found other employment, but you know, after a certain length of time, in any business, you get to a point where you can't start over and make the same pay, or get the same benefits. And while we need the pay, we also need the benefits. Insurance is a good thing to have. A retirement plan is a good thing to have even if as a twenty-year-old you're not thinking that far into the future. When you get to my age, insurance and retirement become a big deal.

There have been times during the last twenty-five years where I just wanted out. In the early years, I avoided telling people where I worked because of the problems the agency was enduring. But, I stuck it out. And now, I have a job I enjoy (most of the time), I mostly like the people I work with, and I feel that I am respected by my supervisors. I can't start over making the same money I'm making now. The insurance benefits could be better, but they are pretty darn good, and in September, I'll have a guaranteed pension.

Some people I work with feel that the agency has no loyalty to it's employees. Well, sometimes it might seem that way, but a lot of the time we don't know all the details. And sometimes, the employee doesn't show loyalty to the agency.

Maybe instead of "loyalty", we should be talking about respect. Without respect, there can be no loyalty. Both must be earned. And neither are issued with your uniforms and ID card. I feel that I've been shown respect and loyalty both. I hope I've returned it.
Posted by Kitten at 6/16/2007 03:35:00 PM No comments: Links to this post